Asli Calkivik, originally from Istanbul, Turkey, never learned to ride a bicycle as a child because there wasn’t safe infrastructure in this megacity when she was growing up.

She came to Minnesota in 2002 to complete her PhD in Political Science at the University of Minnesota-Twin Cities. She returned to Istanbul after graduating in 2010 to teach political science and international relations, until she was invited back to the University of Minnesota in 2016 to be a visiting scholar. She will complete her residency of teaching and research at the end of 2017.

Asli was able to find this exact energy in Cycles for Change’s Learn to Ride classes, where she became a student for the first time since earning her PhD degree.

“I loved the people, both the instructors and the group I was attending with. Such a diverse group–it was wonderful. Because I’m in education, it’s wonderful to see people doing something collectively and that they are passionate about it. They want to be there, they want to learn, and everyone is supporting each other. The community was amazing. I wasn’t expecting anything like that. I’m 46; I’m not young. I’m not saying I’m older, but I didn’t think it would be easy to learn something.”

Translating her learning experience with Cycles for Change to her own teaching in traditional classrooms is something Asli is excited to do.

“The way the whole class was set up, the way we started each time with stretching exercises, or how everybody introduced themselves each time, are things that were done to create community. It made me think ‘how can I create that in my classroom?’ One of the things I grapple with in my classroom is how to make my students admit their differences in opinion. I want them to be able to talk to each other across their differences and feel part of a group. The way the Learn to Ride classes were carried out [with everyone saying the] pronouns they’d like them to use [is] what I want in my classroom–for students to be part of a collective.”

The community aspect was a big part of the reason the Learn to Ride classes were a transformative experience for Asli, but she also discovered she didn’t need to be in total control to learn to ride a bike.

“On different levels, it was not only learning to ride a bike–it was about community, but also it was introspective for me. When thinking about how I approach the world, how I approach things, one of the things the bike taught me is that I don’t let go of things and I probably should a little more. That control freak thing–I want everything to be in my control, but not everything can me. If I’m going down a hill and I’m scared, it’ll be fine.”

However, not letting go of things seems to have worked out in her favor. Asli attempted learning to ride a bicycle several times in her life prior to taking the Learn to Ride classes. It’s not always a control freak thing–sometimes it’s persistence and determination.

“In the spring when I tried to ride by myself, before the Learn to Ride classes, I actually cried. But in the class, I built confidence on the bike. It was traumatic for me, the idea of falling. I didn’t have the confidence I had in the class.”

The classes had an additional impact on her, not just because she learned a new skill, but because of how she and her classmates were treated as humans.

“The values that are cherished in the [Learn to Ride] environment are so opposite of the values that are being promoted worldwide, like competition and egoism, where everyone is trying to take care of only themselves. So the Learn to Ride class was opposite of that–no one was competing with each other; everyone was helping each other out. It wasn’t you the individual; it was collective. It was not based on an exchange economy; you weren’t a customer.”

Now that Asli has completed the Learn to Ride classes, has her own bicycle, and has the confidence to ride, she is taking to the streets of Minneapolis.

“I’ve been to two Open Streets events–Minnehaha and Northeast. Minnehaha was my first bike ride after Learn to Ride. I went grocery shopping one day. But I mostly ride for leisure.”

As someone who has navigated the Twin Cities by bus, those daily bus routes are mostly what she’s seen of Minneapolis and St. Paul, even though she’s lived here for nearly 15 years. Now that she can bike around, she is exploring new places–even in her own neighborhood.

“I don’t know anything outside the bus routes. I’d never been to Cedar Lake; it’s a hassle to commute and wait for the bus. But after living in Uptown for 15 years, I went to Cedar Lake. It was a totally new world for me. It’s like exploring a different world–four blocks from my house and I can easily go there. I love eating good food, so I’ve been exploring restaurants that aren’t easy to get to by bus. My world has enlarged–tripled, quadrupled. It’s not just the technical capacity to ride the bike, it’s not about the means-end value, it’s not just about going there faster. [The bike] gives me an access to different worlds.” 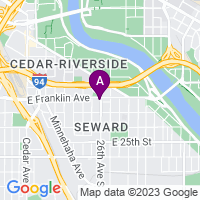